SECURE set a freshwater usage reduction target of 5% in 2022.

As a part of SECURE’s initiative to reduce freshwater usage by 5% in 2022, the LaGlace Full Service Terminal (LGFST) has been working on reducing the amount of fresh water used in the facility's day-to-day operations. They have been working closely with Operations Projects to optimize and assess several parts of the facility to closely monitor their progress.

As seen in the case study included in SECURE’s 2021 Sustainability Report, the project was conceived after noticing the significantly lower water usage at the neighbouring facility. The team identified and adopted several of the more sustainable practices being used, and meters were installed to measure the results. Some of the changes made include:


Thanks to all of these changes, LGFST had reduced its water usage by 32m3 per day by the end of 2021. 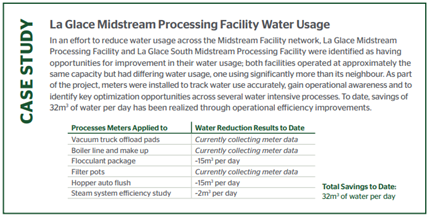 As of May 2022, the team has continued to see great successes with the project. LaGlace Full Service Terminal freshwater usage trends have shown a reduction in daily water usage of approximately 55%. Overall, the project has been a big success for better water sustainability practices and the team is continuing to make the project excel.

"The lead operators have made it a personal mission to reduce the freshwater usage every day. They have worked together to capture any area of the facility that uses fresh water for process and began tracking why its being used and if there are any alternatives besides fresh water. Through consistent monitoring and tracking, all operators at LaGlace Full-Service Terminal are conscious of how much water they use for daily tasks and where we can capture savings." – LaGlace Full Service Terminal Facility Manager, Midstream Infrastructure Operations.

For more about SECURE's ESG Commitments, take a look below at why ESG is so important to us. 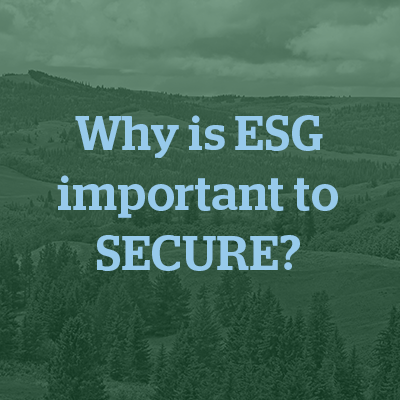